On February 8, AKBBA/CSHK Chairman Emeritus was honored with an induction into the Masters Hall of Fame. Over a hundred and fifty people came to acknowledge this martial arts legend and to thank him for the decades of service he has given to not just the AKBBA/CSHK but to the martial arts community across the nation. 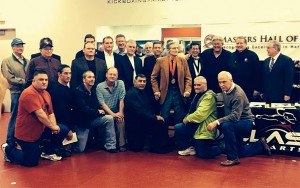 Thank you Grandmaster Toney. We appreciate you. 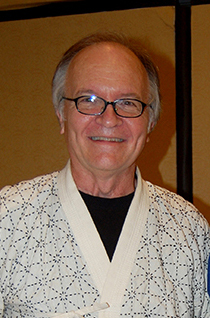 We are saddened to note that Grandmaster Philip Ola, High-Dan Board Member Elect, passed away on December 11, 2013. Mr. Ola was one of the original black belts in Allen Steen’s Texas Karate Institute in the 1960s and went on to teach not only for Mr. Steen but also for Jhoon Rhee in Washington D.C. He trained in other styles and earned dan rank in several other martial arts. The AKBBA and Mr. Steen awarded him a 10th Dan in the summer of 2013. He served in D.C. as a legislative aid to the House of Representatives and as a lobbyist for the steel industry. He earned an MBA from Loyola University and later returned to his native Texas and opened a real estate business in Arlington, TX. The martial arts community is richer because of the influence of Phil Ola. 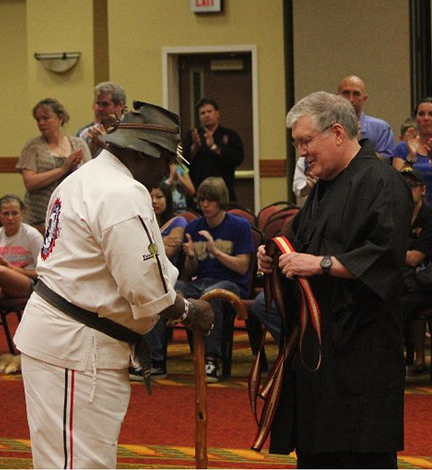 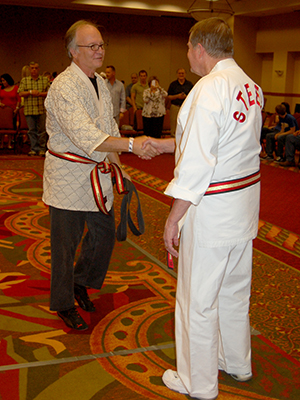 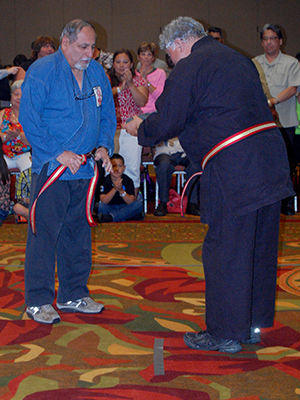 Joe Alvarado puts on his 10th dan ceremonial belt after a presentation from Roy Kuban.

Thehighest rank in karate, the tenth degree black belt, is understandably rare. So it is a historic event indeed when four individuals are promoted to his level. Jose Santamaria, Philip Ola, Fred Simon and Joe Alvarado received this honor on June 14th at the AKBBA ceremony in Mesquite, Texas. All are Texas legends having trained and received their black belts during the “blood and guts” 1960s. GM Santamaria has taught in Killen, Austin and Dallas and was one of the early promoters of karate competitions. Phil Ola, earned his black belt from Allen Steen at the Texas Karate Institute and went on to teach for many years with Jhoon Rhee in Washington D.C. Mr. Simon was GM Rhee’s first African American black belt. Joe Alvarado was a pioneer of karate in the Austin area and has trained law enforcement personnel for years. Congratulations to these highly skilled martial artists. IF YOU WANT TO BE CONSIDERED FOR NEXT YEARS PROMOTIONS you must be a member of the AKBBA for at least a year before you can be considered. Go to the APPLY tab above to apply for membership.

AKBBA/CSHK High-Dan Board Chairman graces the cover of the new Official Karate Magazine 2013 Annual. You’ll want to read this article about one of the pioneers of the martial arts not only in Texas, but in the nation. We are proud that GM Yates has received this recognition. You can view the issue at www.officialkaratemag.com or you can purchase a copy at the upcoming AKBBA/CSHK promotional ceremonies on June 14. Maybe you can get him to even sign it for you!

Dan Anderson was promoted to 9th Degree Black Belt before of panel of several AKBBA High-Dan Board Members in Houston in October of 2012. Grandmaster Anderson is on everyone’s list of the most successful karate fighters ever. He won over 70 championships in his competitive career. He was one of the very first to call his system “American Freestyle Karate,” authoring a book by that name in the early 1970s. He is also a master of modern Arnis. He teaches at his own school in Oregon. 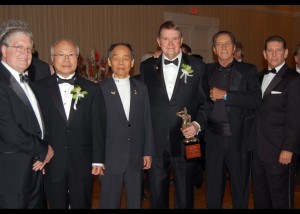 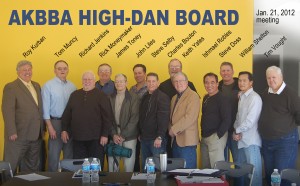 After our High-Dan Board Meeting on January 21, hundreds gathered at Steve Selby’s Dallas Martial Arts Academy to honor our retiring HDB members, James Toney (Chairman), Royce Young (Vice Chairman), Richard Jenkins and Tim Vought. Three of the original founders of the association were present to add their thanks. Allen Steen, Pat Burleson and Ed Daniel joined the current High-Dan Board in the activities. Chairman Keith Yates and Executive Director Charles Bouton presented plaques to the honorees and several members of the crowd shared their memories of the four gentlemen. In additional GM Yates made “Karate Master Hall of Fame” induction presentations to Mr.s Young, Vought and Jenkins (Mr. Toney was previously inducted). Of course plaques and paper certificates cannot adequately express our appreciation to these outstanding martial artists who have served so diligently for so many years on the board of the AKBBA. Go to the gallery page to see photos of this historic event in the life of the American Karate Black Belt Association/Chin Sook Hage Kwan.

Our purpose is to unify martial artists (regardless of style) and to promote excellence. We are proudly non-profit (although many of our members are highly successful).

• The AKBBA-CSHK High Dan Board is composed of recognized mature and successful masters, bringing skills from many traditional styles and have hundreds of years of combined experience in teaching, competing, writing, and business.

• Together with the input of the AKBBA-CSHK Voting Affiliates (3rd Dan or higher and running schools) they set and oversee the rules and standards for belt promotion and general protocol.

• The High Dan Board teaches seminars nationwide and is available for to answer questions on technical or business topics. They also officially review the authenticity of all certifications.

• The AKBBA-CSHK stands for goodwill, respect, assistance, and cooperation among ALL martial arts.