Chairman Keith D. Yates and several other board members promoted five high black belt ranks to candidates testing on December 13, 2014. Aaron Barnett, Ceaser Johnson and Tim Looney received their fifth dan rankings. Caroline Goodspeed was promoted to seventh dan and Kelly Cox received his eighth dan black belt. A very special promotion was made as Mr. Duane Ethington received his tenth degree black belt certificate. Grandmaster Ethington has been in the martial arts for almost five decades and he still teaches weekly at the age of 77. He has demonstrated true warrior spirit over his career and his many students will carry on his legacy. Congratulations to all these outstanding martial artists. 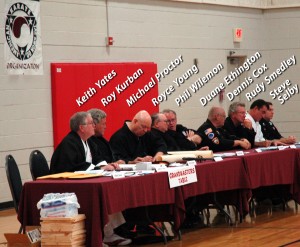