Allen R. Steen, 10th Dan, is our founder and continues to serve as advisor to the HDB. Mr. Steen was Jhoon Rhee’s first black belt in America. He enrolled in Rhee’s first TaeKwonDo class at the University of Texas in 1959, just shortly after Rhee had arrived to introduce the Korean martial arts to the United States. Mr. Steen is widely acknowledged as the father of “Texas Blood and Guts” karate and his dojo, opened in 1962, in Dallas was the first commercial karate school in the Lone Star State. In 1966 he beat both Chuck Norris and Joe Lewis to become grand champion at Ed Parker’s Long Beach International Karate Championships, at the time the most prestigious tournament in the world. His pioneering Texas Karate Institute and its black belt students went on to establish the Texas brand of karate as one of the premier influences of martial arts in the 20th century.

Skipper Mullins, 10th Dan, was one of the original members of the SWKBBA and AKBBA and named by Black Belt Magazine as one of the top-ten karate fighters of all time. Chuck Norris called Skipper his toughest opponent. As a U.S. Marine he taught martial arts to his fellow Marines as well as to the FBI during his assignment in Quantico. He later joined the Dallas Fire Department and retired with the rank of captain.

Jeff Smith, 10th Dan, is not only one of the most winningest point-and full-contact fighters (a seven-time PKA world light-heavy weight champ) ever but has established himself as a visionary in the area of business management and marketing for the martial arts industry. Originally from Texas, Smith moved to Washington D.C. and was instrumental in helping the late Jhoon Rhee set up his international empire.

Bill Wallace, 10th Dan, is widely known as “Superfoot” because of his incredibly fast left leg enabling him to win almost every major karate tournament in the 1960s and ‘70s and then go on to win 23 consecutive professional bouts as the PKA middleweight world full-contact champion. Also an internationally known teacher, Wallace earned a master’s degree in Kinesiology from Memphis State University. An author and film actor, he continues to give seminars around the world.

Dan Anderson, 10th Dan, known as “Super Dan” during his competitive career in which he won over 70 grand champion titles. He has further established himself as an expert teacher in the Filipino arts and has written extensively on American karate and Arnis. Based in Oregon, he has combined his vast experience into a unique blend of combat styles into the Anderson Martial Arts Systems, which he teaches around the globe.

Of course Allen Steen, the AKBBA Founder and President Emeritus would be the first individual listed. See a more complete profile under A Martial History.

Next would be one of the AKBBA/CSHK founders, Ronny Cox. Mr. Cox was among the AKBBA/CSHK founders and one of the greatest fighters in the karate circuit of the ’60s and ’70s. He was an original black belt in Steen’s Texas Karate Institute and became an Addison, TX police officer. Mr. Cox was the first Association Secretary and instrumental in our early years. He was shot and killed during a drug operation of the Addison and Dallas Police Departments in December of 1986. He continues to be missed by the Board and membership of this Association. 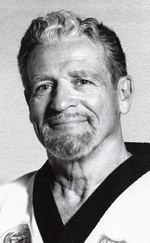 James Toney served with distinction as our Chairman from 1997 to 2011. He was one of the original board members of the old Southwest Karate Black Belt Association and of the original AKBBA. He began his karate training in the early 1960s at the Texas Instruments Karate Club. He always considered himself a student, achieving black belts in TaeKwonDo MooDukKwan, TaeKwonDo ChungDoKwan, Okinawan Dai Ni Gojuryu, and Jujitsu. He was named Shihan for North America by the Kokusai Dai Ni Gojuryu Karate Kyokai. Many champion fighters of the early era called Mr. Toney sensei.

For years he was research geologist at the University of Texas at Arlington. He was a true Texas and American Karate pioneer, and much of what made karate in the Southwest the toughest and fastest growing in the nation, can be attributed to Mr. Toney who passed away in 2015.

Royce Young a Texas Karate pioneer who was Vice-Chairman from 1997 to 2011. Beginning his training in 1964, he was one of the earliest students of the pioneering TEXINS karate club, begun by Allen Steen at the Texas Instruments in Dallas and in 1970 became the head instructor and taught there for decades. Mr. Young was born in Memphis, Texas in 1938, and was a Golden Gloves Champion when still in high school.

He taught many state and national champions and several of his students have gone on to become teachers and school owners. Although now retired from both TI and the martial arts, Mr. Young continues to inspire students who still seek out his wisdom and abilities.

Richard Jenkins is another Texas Karate Pioneer, a Charter Member of the old Southwest Karate Black Belt Association and original American Karate Black Belt Association. He was born in 1942, and began training in Shotokan Karate while in the U.S. Navy. He earned black belt rank at the age of 19 in 1961. He holds dan rankings in TaeKwonDo ChungDoKwan, TaeKwonDo MooDukKwan, Ni-Gojuryu Karate, and Judo.

In 1965, he moved to Dallas, and after meeting Allen Steen at a fitness club, was asked Jenkins to work as a business manager at the fledgling Texas Karate Institute. He helped build the school into a successful, state-wide brand and then proceeded to do the same thing with schools in Oklahoma City, St. Louis, and Florida. His students include noted champions and school owners. He served as a founding board member and Secretary from 1986 to 2000. Now living in Houston, Mr. Jenkins retired as an Emeritus member in 2011.

Tim Vought was a first generation student of AKBBA co-founder Ed Daniel. He was founder and chief instructor of Shorin Aiki Budo. He began martial arts in 1959, while a student at Louisiana State University. A long-serving Dallas police officer, Mr. Vought was the 1972 National Police Olympics Karate Champion. In 1974 he co-founded the Texas Police Athletic Federation, an organization dedicated to promoting athletics and camaraderie among law enforcement personnel.

He developed street combat and survival tactics training programs for law enforcement agencies and was Head Defensive Tactics Instructor for the Dallas Police Department. In recognition of his position as a Texas martial arts pioneer he was inducted into the Texas Martial Arts Hall of Fame in May of 2000. He retired from the High-Dan Board at the end of 2011, and passed away in 2017.

Fred Wren was one of the early Texas Karate champions, earning the nickname “Whirlwind Fred” because he came after opponents like a tornado. The winner of multiple tournaments in the 1960s, Wren helped to establish Texas, and the American Karate Black Belt Association as a hot-bed for sport Karate. One of his greatest championships was over Jim Harrison at the 1968 U.S. Karate Championships.

An original black belt of Allen Steen, Mr. Wren became the head instructor at the famed East Dallas TKI dojo and all who entered saw the sign at the back of the room that proclaimed “House of Wren.” He was truly one of the great fighters who put Texas on the Karate map. See more about Mr. Wren at our Hall of Fame page.

Jack Erickson who along with his wife Marian, went from being early Allen Steen black belts to founding their own system and school, the “Dragon School” of Tae Kwon Do in 1976. Training not only under Mr. Steen but also under Jhoon Rhee and Ye Mo Ahn, Mr. Erickson earned high-dan levels in ChungDoKwan and MooDukKwan. Ever the gentle giant, Jack inspired a whole generation of martial arts practitioners in Texas.