In the Black Belt (Dan) ranks there are generally 10 Dan/degrees (some Korean systems only promote to 8th Dan). Under AKBBA/CSHK standards, 1st–8th Dan are considered earned rank levels and should be awarded after a resume review and a physical examination or performance. Sometimes performance requirements are waived for higher ranks but this is up to the individual school.

1st-5th Dan:  Can be awarded by any Affiliate Instructor or HDB Member who holds a rank at least two degrees higher than the grade being awarded (i.e. a 4th Dan may award a 2nd Dan, etc.). Black Belt exams are expected to be comprehensive and strenuous. We provide Black Belt certificates, 11” x 17” parchment paper (order on the “Catalog” page). NOTE: Black Belt Members who are NOT Affiliate Instructors should contact Association headquarters if you are interested in promoting students to black belt levels as we may be able to provide an Affiliate or HDB member to sponsor you.

6th-10th High-Dan:  Master Black Belt promotions are the exclusive prerogative of the High Dan Board. The promotion will be voted on by the HDB after a resume review. Candidates must have been members for at least TWO YEARS. Such ranks are expected to possess advanced skills and deeper knowledge of the martial arts (not just a certain number of years as a black belt). 6th, 7th and 8th Dan promotions will be conducted by at least one HDB Member and will usually require a physical performance. Allowances can be made for candidates over the age of 50 and for others with pre-existing medical conditions (i.e. a bad knee or back). It is up to the board to determine the extent of the physical aspects of the examination at this point.

6th Dan and Higher Certificates:  Are on 11” x 17” parchment paper and contain HDB signatures and chops. There is an honorarium charge for EACH HDB member attending such a promotions ceremony. If travel of more than 100 total miles is involved there should be an extra donation for expenses. These should be discussed with the board member well in ADVANCE of the event (honorariums are in addition to certificate fees). 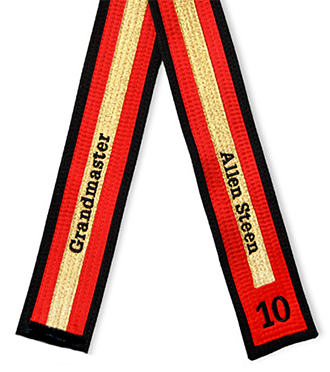 9th and 10th Dan:  These are extremely rare and are considered “honorary” ranks. Typically there is a formal presentation but no physical performance requirements. NOTE: Because of the many differences in systems and style concerning “titles” such as Kyoshi, Hanshi, Kwang Jang Nim, etc., the AKBBA/CSHK does not award martial titles for instructors.

We make every effort to ensure that a High Dan promotion is actually awarded by the individual’s instructor but we acknowledge that for some high-ranking practitioners, their original instructor has passed away or is otherwise no longer involved in the martial arts. In cases like this we request a comprehensive resume (showing significant contributions since your last promotion) and letters of recommendation.

We would like to point out that while the AKBBA/CSHK “certifies” or, in the case of High Dan promotions, awards a Black Belt ranking, it should be recognized that no HDB signatory is personally awarding the promotion (unless the candidate is a direct student of that board member). Holders of the AKBBA/CSHK Black Belt certificate can thus state that they were promoted under the standards and auspices of the Association, NOT that they were promoted to such and such a Dan rank personally by “grandmaster whomever.”

This varies with each system and style but the AKBBA/CSHK recommends these minimum times.

Beyond the rank of 3rd Dan, total “time in grade” can become more important in determining eligibility for rank advancement than the actual time between ranks. The HDB carefully considers the content and quality of the skills and character reflected in an individual’s total martial arts history. In other words, someone may be promoted to 6th Dan and then be certified as a 7th Dan after only a couple of years because their TOTAL time in rank exceeds their Dan level. Again, this is at the sole discretion of the HDB.