We remember AKBBA karate pioneer and international champion Skipper Mullins 4/25/46–5/15/20. Services will be at noon on Friday, May 22, and live-streamed on Facebook.

Bruce Brutschy, Keith Vitali, Allen Steen, Dan Anderson, Hans Gerd Hinz, Mike Genova, at the 10th degree black belt promotions in Dallas on November 16, 2019. Along with GMs Brutschy, Vitali, Hinz and Genova, Troy Dorsey and Linda Denley were all awarded with this prestigious honor by the AKBBA See more at the photo gallery 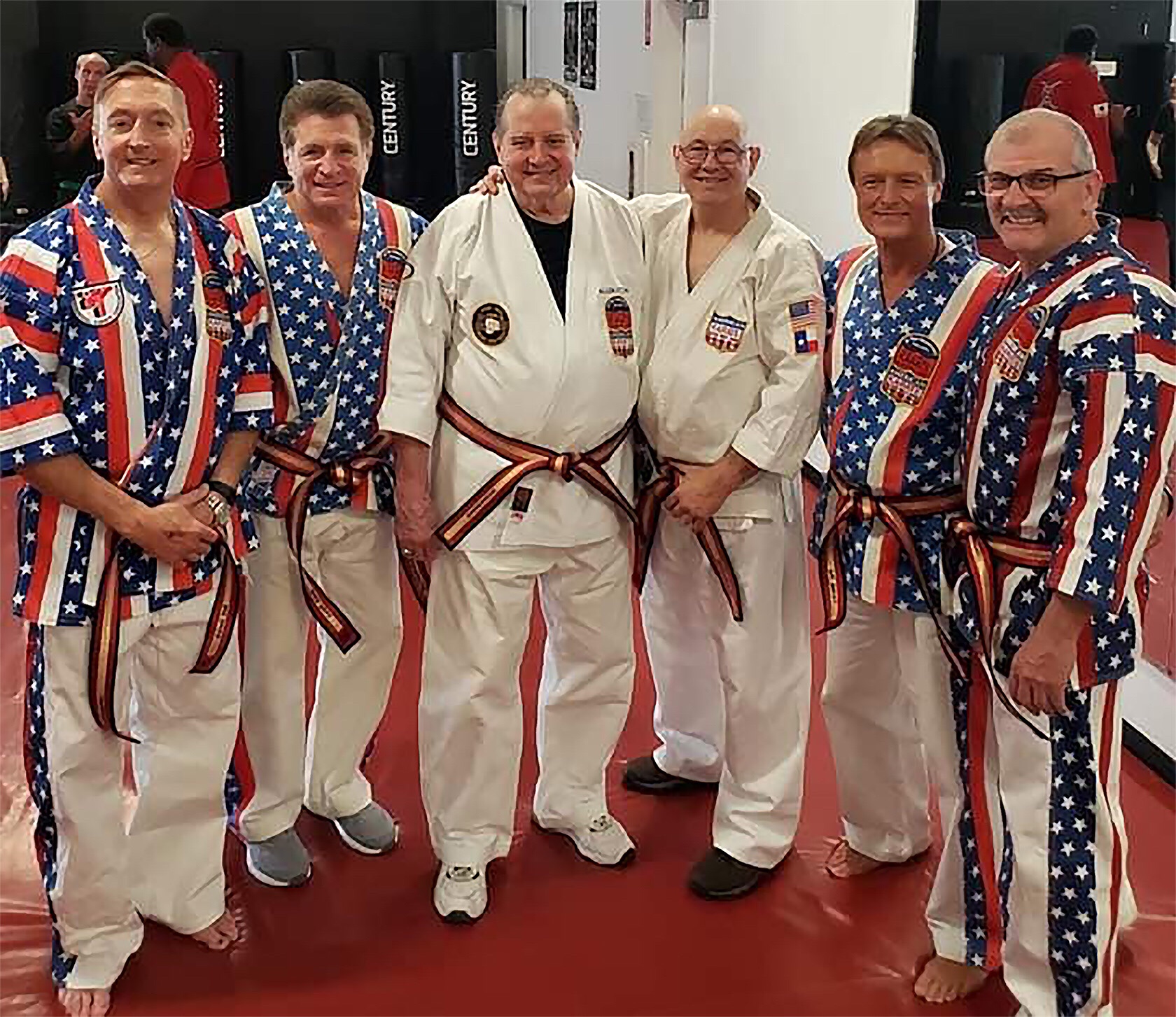 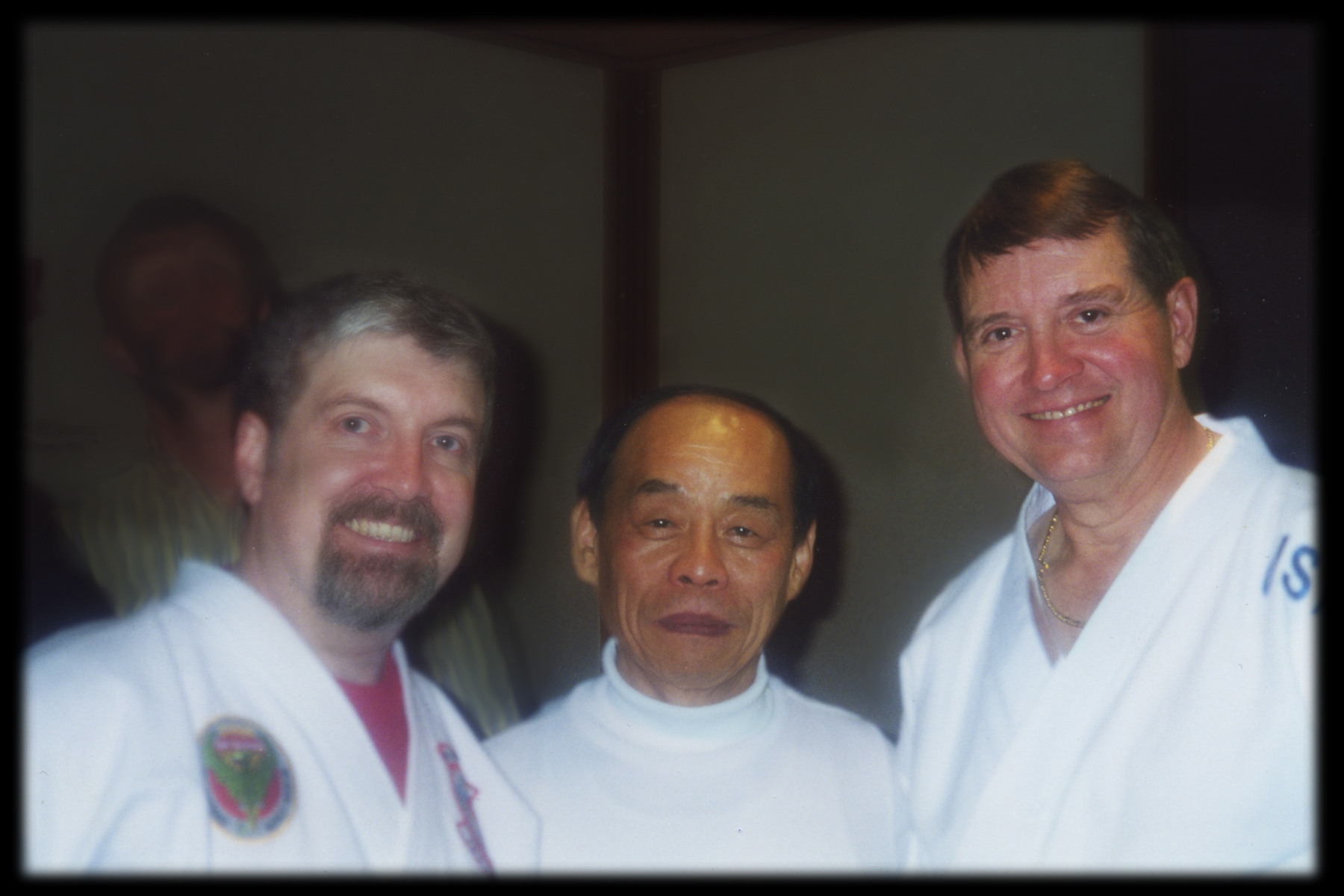 Grandmaster Jhoon Rhee, the acknowledged “father of taekwondo in America”, passed away on April 30, 2018. He was 86.

Mr. Rhee was, of course, the instructor of Allen Steen (at right in the photo above, along with Keith D. Yates, AKBBA High-Dan Chairman). He introduced taekwondo to the US when he arrived in Texas in 1956. His first black belt on American soil was grandmaster Steen who signed up for lessons after an impressive demonstration by Rhee at the University of Texas.

An Rhee was impressive indeed. He could jump in the air and throw three powerful side kicks before hitting the ground. Even in his later years he continued to demonstrate his famous 100 pushups in one minute. Perhaps even more impressive were his contributions to the martial arts community in America and around the world.

He invented the foam sparring gear used in all competitions today. He originated what he called “classical ballet,” performing martial arts forms to music. His many seminars and books on his philosophy affected tens of thousands of students and instructors. When he left Texas for Washington DC, he set up a chain of schools and began to teach celebrities and politicians including Bruce Lee, Chuck Norris, Muhammad Ali, Tony Robbins, Newt Gingrich, and Joe Biden. His hundreds of black belts included champions like Mr. Steen, Pat Burleson, and Jeff Smith.

Of course, without Jhoon Rhee, the American Karate Black Belt Association would not exist. The legacy of this great man and martial artist will be carried on by not just taekwondo stylists but by all martial artists worldwide.

Our purpose is to unify martial artists (regardless of style) and to promote excellence. We are proudly non-profit (although many of our members are highly successful).

• The AKBBA-CSHK High Dan Board is composed of recognized mature and successful masters, bringing skills from many traditional styles and have hundreds of years of combined experience in teaching, competing, writing, and business.

• Together with the input of the AKBBA-CSHK Voting Affiliates (3rd Dan or higher and running schools) they set and oversee the rules and standards for belt promotion and general protocol.

• The High Dan Board teaches seminars nationwide and is available for to answer questions on technical or business topics. They also officially review the authenticity of all certifications.

• The AKBBA-CSHK stands for goodwill, respect, assistance, and cooperation among ALL martial arts.