In 1964, Allen R. Steen formed the Southwest Karate Black Belt Association. He was an international champion and known as the father of “Texas Blood and Guts Karate.” He opened the first commercial dojo in Texas (the Texas Karate Institute) and was the founder of the United States Karate Championships in Dallas—one of the three major national tournaments in those days.

The Association became a “Who’s Who” of top competitors such as J. Pat Burleson, often called the first national champion; Skipper Mullins, 5-time world champ; Fred Wren, one of the winningest champions of the era, and Demetrius Havanas (the “Golden Greek”).

Karate in America, and especially in Texas, was hard and tough (hence the “Blood and Guts” nickname). The Association grew so large that in 1972, the name changed to the American Karate Black Belt Association.

In the early 1980s, after years of successful school ownership and tournament promotion, Allen Steen migrated to other business ventures and divested his karate schools and tournaments to various students and associates. Many original AKBBA black belts were still teaching and practicing including Charles Bouton, who continued to operate a Texas Karate Institute and AKBBA region in East Texas that Mr. Steen had granted to him in the early 1980s.

Bouton reconnected with Richard Jenkins (a teacher and mentor) from the original SWKBBA and they carried on the Texas-style tradition by expanding the AKBBA. They were joined by other champions such as Ronnie Cox, of Dallas and several other noted instructors.

In March 1986, “Chin Sook Hage Kwan” was added, derived from a term that the original group had jokingly bantered about, “Tex Kwon Do.” The name Texas comes from the American Indian “Tejas,” which literally means “friendly.” Friendly in Korean is “Chin Sook Hage” and “Kwan” is school. 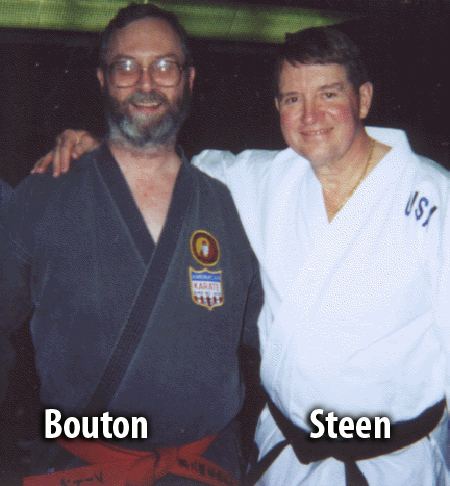 Today the AKBBA/CSHK operates under a High Dan Board whose members are in direct lineage to the original SWKBBA/AKBBA under Grandmaster Steen. The Association is a registered nonprofit and focuses on the standards set by Steen, and the other founders from the 1960s. This is the association that Mr. Steen recognizes as the continuation of his legacy.

We are a Texas, Non-Profit Corporation and operate under the guidance of the High-Dan Board composed of several of the original SWKBBA/AKBBA black belts from the ’60s and ’70s; Keith D. Yates (one of Steen’s original black belts) serves as the current Chairman, John Liles (a black belt of Charles Bouton) is the Executive Director, (see the Board’s bios)