Skip to primary content
J. Pat Burleson, one of the founding members of the AKBBA, passed on October 31, 2021. GM Burleson was a mainstay of American Karate not only in Ft. Worth, Texas where he developed a chain of schools, but across the country and around the world. He won the first National Karate Championships put on by Jhoon Rhee in Washington D.C. in 1964. Beginning his martial training in Japan while in the Navy in 1959 he returned to Texas and, along with Allen Steen, established the Lone Star State as the home of “Blood and Guts” Karate. His students became champions and renowned teachers and hundreds of them gathered at his memorial services on November 3rd to pay their respects to one of the pioneers of American martial arts. 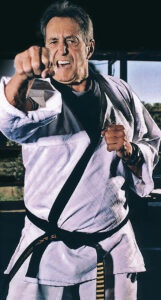